Usually, cats and rats are believed to be enemies, however, the little kittens and their rat friends in this story seem to have missed the memo. Emile and Remy are the names of the two resident rats at Brooklyn Cat Cafe, which is an establishment in New York run by Brooklyn Bridge Animal Welfare Coalition (BBAWC).

The café helps out adoptable kittens and cats from BBAWC and other various local rescues. And just recently, they have got quite a lot of attention – precisely because of their rat staff.

Brooklyn Cat Cafe went ahead and shared an Instagram video featuring two baby kittens – and a young rat … who was giving them a thorough bath!

The primary idea may seem odd at first – why put rats and kittens together? However, as it turned out, there is a very good reason for doing so. The entire story of kitten-rat relations at the organization began two years ago with the rescue of Ebony, an orphaned four-week-old kitten who tested positive for feline leukemia.

The baby was not able to spend time with other cats because they would become infected as well, but she needed companionship. The staff did something really out of the norm then – they found a white rat who needed a new home and adopted him – which would soon end up proving to be the beginning of a sweet friendship.

“Ofcourse we named him Ivory,” Anne Levin, BBAWC who is the executive director, explained HuffPost.

“He and Ebony became great friends and would cuddle and romp in their crate.” Unfortunately, Ebony died when she was only four months old – but the idea of kittens and rats being pals remained.

Ivory went ahead and befriended many a kitten and was a great companion for his whole life. Back in February 2017, already an elderly rat, he was euthanized after a long time of monitoring his body while his health was declining. 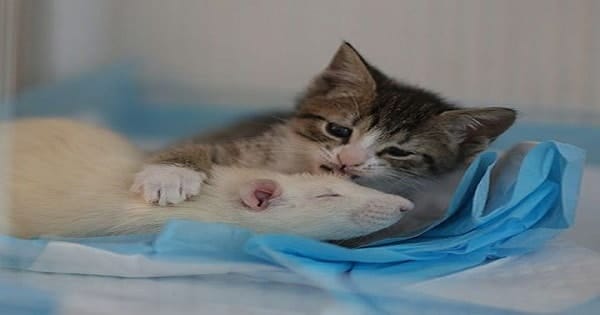 Since that time, the organization has adopted Emile and Remy from a rescue group Helping All Little Things. The rats’ terrific mission is simply to spend time with kittens younger than eight weeks who have to be separated from other cats until the time of their vaccinations. If the kittens are not orphaned and the mother is still present, the rats are allowed to play with the babies only under close supervision. Needless to say, they are absolute professionals at this task!

“I know the rats we have often groom themselves and each other and it seems to be both a self-comfort and a friendship connection,” Levin stated. 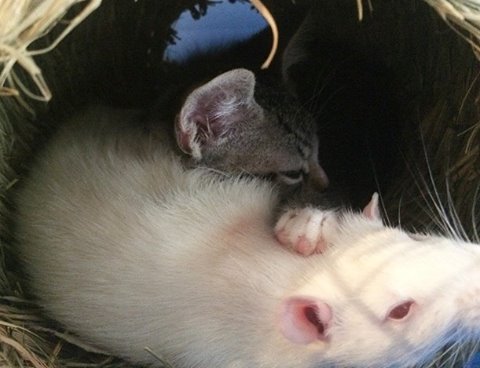 Once again, when looked at a bit closer, rats prove to be very, very far from the way so many people’s imagine them to be.

“People don’t realize how smart and sweet [rats] are,” Levin stated to HuffPost. “Emile rollson his back and I can tickle his tummy. They make a purring/clicking sound when I rub their face and nose and they love to cuddle and know when it’s evening time and they get their snacks and cuddles.”