Television shows and films often depict the rivalry between cats and dogs. It’s always a hilarious addition to comedic acts, where each side attempts to prove that their species is much superior. Cats & Dogs is a famously known movie that uniquely portrayed pets. The storyline will keep you watching until the end. Will their owners notice what is happening? Who will be the victor in the ongoing war to achieve their individual goals? 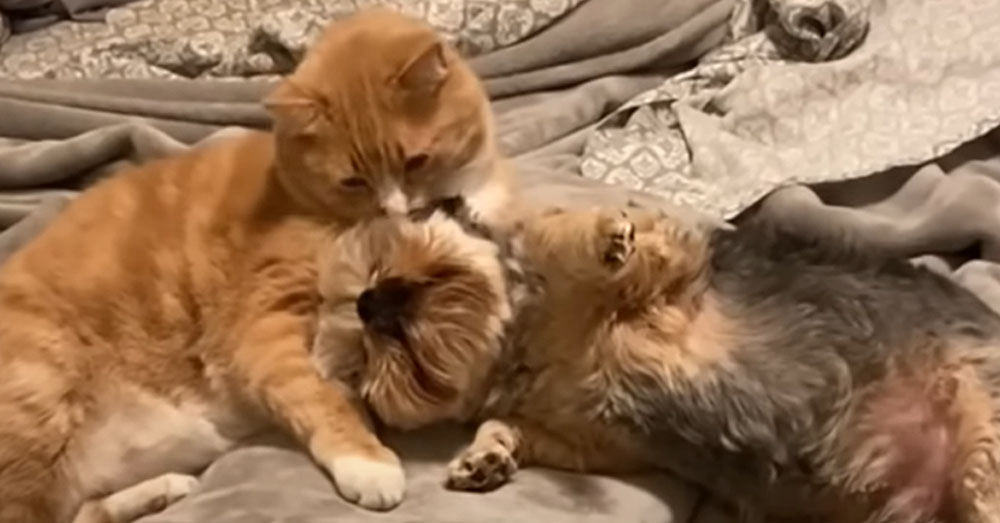 Garfield is also a movie reference that shows a cat’s animosity toward dogs, but it is one-sided. But as the movie goes on, Garfield and Odie become best buds and great pets for Jon. In reality, harmony can be achieved when you live with felines and canines.

One couple, Ashley and Jason, witness the loving friendship between Sarge and Conan in their everyday life. It was a surprise to the couple when they learned how their beloved pets spend time with each other of their own free will.

“Sarge learned that if I flop in front of Conan, he might start giving me kisses,” Jason shared. The little pupper would just approach Conan and lay beside him, and Conan would give him something like a hug; it was just the most adorable sight. It became their special thing, which they do daily. They really have built an amazing bond with warm cuddles and tiny kisses. Conan is the sweetest orange tabby, and who wouldn’t want to cuddle with him?

Aside from Conan, the couple also has another cat named Eleanor. She’s a shy, timid furball, and, according to Jason, Eleanor doesn’t know how to interact with the cuddle buddies. “Unfortunately for Eleanor, it’s team brothers, and Eleanor doesn’t get in on the cuddle session very often,” Jason explained. When Sarge is asleep, Eleanor will cuddle next to him, but when the pup wakes up, she immediately moves away. There might be an awkward vibe between the two, but there is no room for hate in their family.

“I’ve seen pets cuddle up to each other, but I’ve never seen a dog flop over and beg for love from a cat like that,” says Jason. The couple also shared that there are days that Conan doesn’t feel like giving hugs. Sarge would try and ask for one, but when all else fails, he goes for a belly rub from Ashley. Clearly, Sarge is the baby in the family, knowing he can easily get what he wants.

The couple created a TikTok and Instagram account for their fur babies. You can see more cuddling sessions from Sarge and Conan, and the lovely Eleanor is also there. You’ll get more updates about their friendship — photos and videos showing that Sarge and Eleanor love each other even without daily cuddles.