PHILIPPINES – A one-month-old kitten has successfully been rescued in the Philippines after its tormentors sewed together her eyelids, ears, and nose. The cat, whose been named July, was found stumbling around an alley in Manila back on Valentine’s Day.

The poor thing was barely able to eat anything and its abusers had threaded thick cotton through her skin. With its eyes and ears completely stitched shut, she had difficulty walking around. 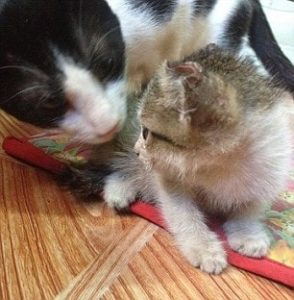 July is believed to have been in that shape for around a week as the wounds had already healed. A cat lover, whose name is Leonora Calamba, 41, found the kitten stumbling around alleyways nearby to her home and immediately took her inside for treatment.

In this pic post, July yells in agony as Leonora and her family carefully unpick the tight stitches. 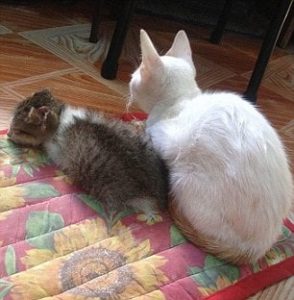 Leonora stated: ‘The poor kitten was in pain. It was so hard to take out all of the stitches. She was screaming and meowing because it was hurting her so much.

‘But doing this was the only way to save her. Whoever could do such a thing to a newborn kitten is sick, they need to be punished before they do it again.’

Leonora’s niece Jonil Manatad Novela, 21, now believes that the stitches had been in place for well over a week as the wounds had already started to heal.

He explained that July had now recovered but had been left with scars on its ears and nose.

Jonil went on to add: ‘July is doing well now and seems to be having a good time with other stray cats that my aunt has taken in.

‘When my aunt saw the kitten in the street she grabbed her immediately and took care of it. It’s so tragic. We found the kitten with thread through its eyes, nose and ears.

‘We don’t know who did this. We can only assume that it’s some kind of psychopath. Who else could do this kind of cruelty to a defenceless kitten? They are a useless person, no heart, they are sick.

‘The kitten was only about two weeks old. Thankfully we found her in time or she would surely have died.’

Thank goodness she was saved!